Marvel Series slot Wolverine from Playtech is based on the Hollywood Blockbuster. This free online slot game offers a fun, action-packed betting experience. Featuring 5 reels with 3 rows and 25 paylines, there's a range of ways to win. Unfortunately players won't be able to find this game online after Disney acquired Marvel. If you're lucky you may find the demo, but we've provided the review below in the hopes the real money game will make a return one day. More Games To Play For Fun

Wolverine, the iconic comic book and movie character has mutated into Playtech's Wolverine free online casino slot game. In this Marvel Series game from Playtech, Wolverine faces has arch-nemesis Berserker. Two great features when playing this game include Wolverine being injected with Adamantium which will freeze wilds for the next free spin and Wolverine clawing the reels for free extra wilds. Creators Playtech have developed this all-action game, and the Beserker Rage Feature is just one of the great elements of this game, which also include Adamantium Free Spins, Wild Stacked Wolverines, Wolverine Scatters, and 4 Random Marvel Jackpots. 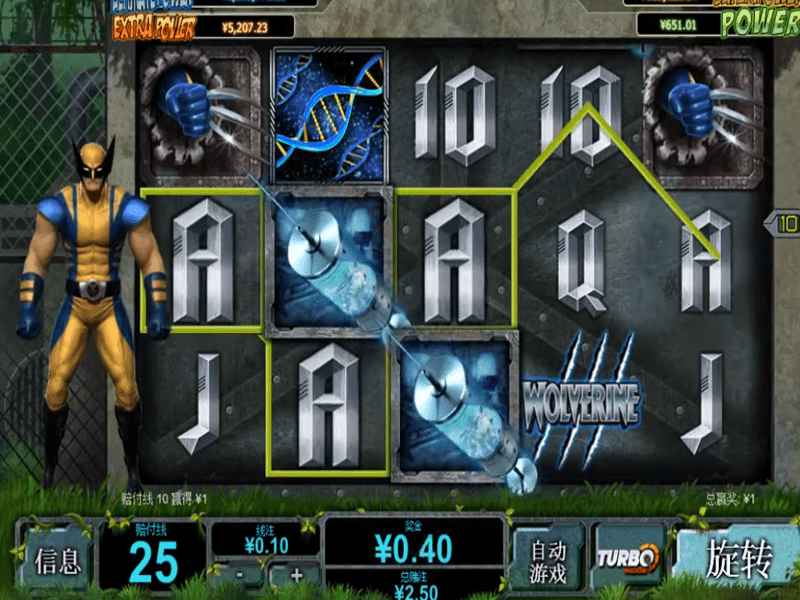 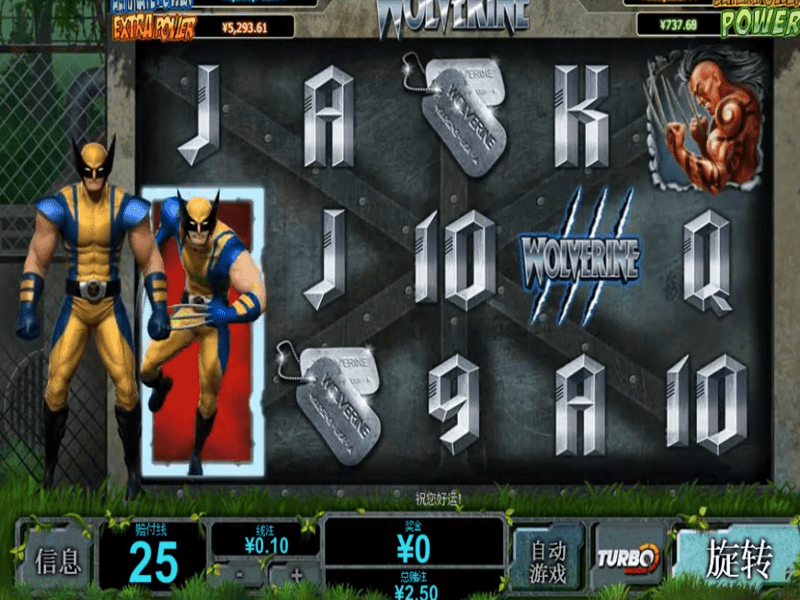 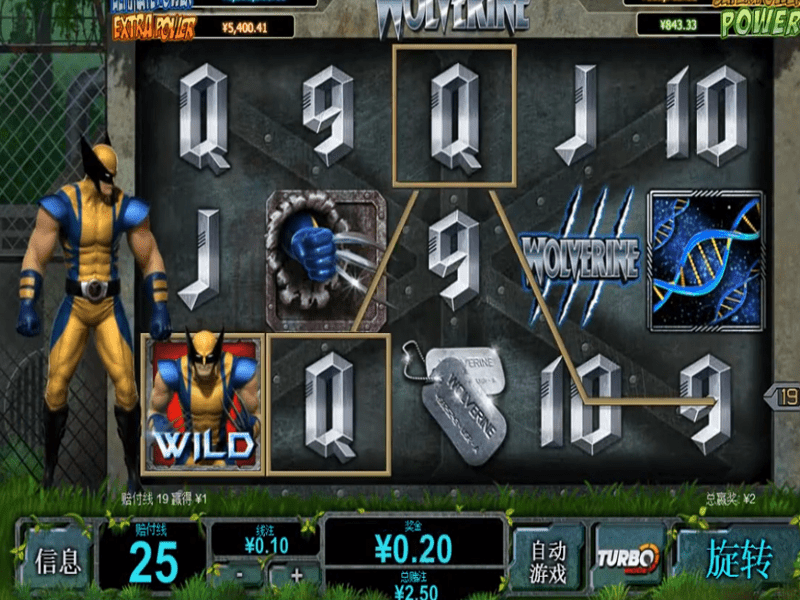 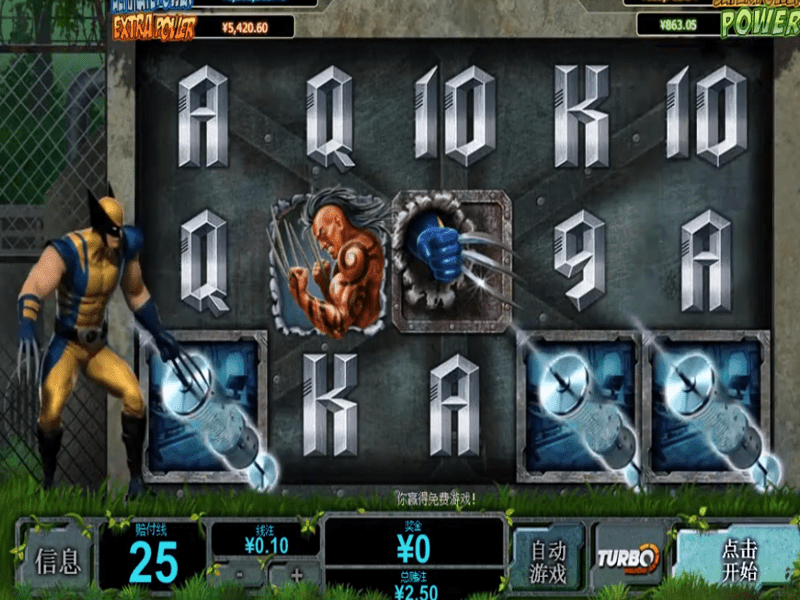 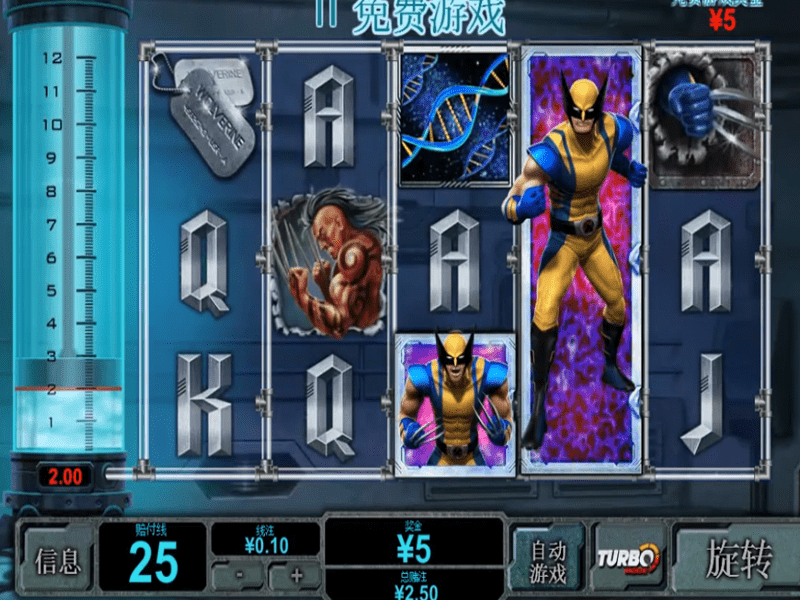 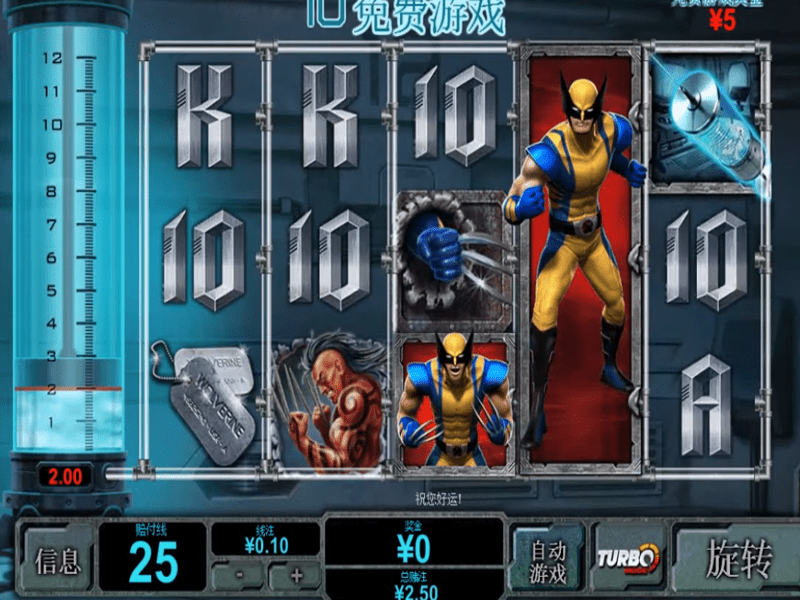 Playtech's Wolverine online slot game is available to play free for fun, with no download and no registration in demo mode at some of the best online casinos in 2023. It can be accessed on mobile, tablet and laptop across iOS and Android platforms for real money using free spins and no deposit bonuses.

Featuring the iconic character from the comics and movies, the Wolverine is played across 5 reels and 25 paylines.

You can play the Wolverine free slot by pressing the Spin or Autoplay buttons. There's also a Turbo Mode which sets the reels spinning faster for more exciting play. You can even check out the paytable with the info button.

Payout symbols include 9-A worth up to 150 coins, Wolverine's fist worth up to 250 coins and dog tags at up to 200 coins and Berserker at up to 500 coins. You need to line up 3, 4 or 5 symbols for a payout. Any combination of symbols apart from the scatter, starts on reel 1 and they must be adjacent to each other.

Wolverine Wild symbols can be single, double, or stacked. The stacked Wild Wolverines have a huge role to play in this free online game. If the superhero shows up in 1-3 positions at the same time he can be used as a substitute for all other symbols, except the scatter, awarding you extra combinations. 2-5 Wolverines lining up on a payline leads to wins of between 5 and 3,000 coins. 3-5 Scattered Wolverines give wins from 2x-100x your bet.

The object of Wolverine slot is to match symbols across the 5 reels. The more symbols you match during each play the bigger the wins.

Below is an overview of the bonus features you can expect to find in this thrilling, free online casino game from Playtech. There are three main bonus features including multiple free spins.

Playtech's Wolverine free online slot game is has a rather low RTP at 92.01% but the exciting play makes up for this. Volatility is low medium which offers the best of both worlds from low and medium volatility slots. Payouts might be a bit lower than for medium volatility slots but they occur more frequently. There are four possible progressive jackpots in this game, the largest of which could net you a win close to $1 million. If you're lucky you'll get a chance to pick 'Power', 'Extra Power', 'Super Power' or 'Ultimate Power' by matching 3 symbols when the jackpot feature is randomly triggered. The bigger your stake, the better your chance of triggering the jackpot on Wolverine slot.

This free online slot game from Playtech is optimised for all devices. Wolverine slot can be played in demo mode or for real money just as easily on mobile as on a desktop or tablet. Bright graphics and lots of action make it an exciting game at any size whether on Android, iPhone, or iPad. With all those options available you'll never miss a moment of rip-roaring, claw-swiping Wolverine play. You'll have Marvel's superhero at your fingertips, wherever you are.

Character's from the Marvel Universe are a hit in popular culture all over the world with countless comic books and more than a dozen movies, with three of them devoted to Wolverine's story. This has transferred to online slot games where the mutants have become global favourites. Wolverine has always been a standout superhero so it's not surprising that this exciting Playtech slot is a hit with players from the USA who can play for fun or bet real money in online casinos. You can find US no deposit casino bonuses to try Playtech slots for free here.

Founded in 1999 and listed on the London Stock Exchange, Playtech provides intelligence driven software, content, platforms and services to the gambling industry, focusing mainly on the US iGaming market. The Playtech product suite includes casino games, sports, virtual sports, bingo, lottery, poker and live dealer. They focus on providing their partners with multi-platform products and services. Playtech are committed to quality and innovation. The company is considered one of the best providers of online slots which feature high quality graphics, interesting gameplay, an array of themes and the chance to win big.

Playtech has developed a range of free games for you to play in online casinos. They have everything from Ancient Egypt to Zodiac Charms. If you've played Wolverine slot and are a fan of superheroes then one popular game in 2023 is Man of Steel. From the moment the logo screen loads you know you're in for an epic game experience in this Superman themed slot. Not all superheroes wear capes and the Wonder Woman slot proves this statement. If you've had enough of superheroes why not saddle up and try your luck in the fun, western-themed Wild West Slots? With an almost endless variety of free online slot games to choose from, there's something to suit everyone. Games with historical and/or adventure themes are trending in 2023. Gonzo's Quest from NetEnt is not a new game but it's still popular amongst players. It is based on the historical explorer Gonzalo Pizzaro who went in search of Eldorado the lost South American city of gold. Book of the Dead, developed by Play n'Go is definitely worth a spin if you're a fan of Ancient Egypt. Achilles Deluxe Slot from RealTime Gaming is based in Ancient Greece and revolves around the battle of Troy. Different categories of free online slots suit different people and some slots feature more than one category. If you want to really challenge yourself, then Mega Spin Slots might be the thing for you. You'll have to keep focused if you want to play multiple games at the same time.

Progressive slots such as Playtech's Wolverine online game will appeal to you if you like to play the long game and don't mind waiting for that big jackpot. With up to 25 paylines, multi-payline slot games are sure to hold your interest if it's all about the win for you. Or you might prefer the multiplier which now features on so many slot games.

Wolverine has a superhero theme and this genre is always popular. Asian themed games are another favourite with varying titles from all major games' developers. It seems that old is new, with Retro games being amongst the biggest hits. The classic fruit slot has transferred its popularity from land casinos to online casinos.

One of the most popular X-men characters is Hugh Jackman's Wolverine. He is an intriguing character with a mysterious past. But real-life Wolverines could be just as interesting. The largest member of the weasel family, wolverines resemble small, stocky bears. Although relatively small the wolverine has a reputation for being a strong, ferocious predator with the ability to kill prey much bigger than itself.

It is spread across the Northern boreal forests from Alaska to Siberia. Wolverines are incredibly strong for their size with powerful jaws, sharp claws and a thick skin. You can see why the character Wolverine was associated with them.

Wolverines' thick fur is oily making it frost-resistant. In the past it was favoured by trappers and hunters who used it to line their jackets against the freezing temperatures. The exact number of wolverines found globally is not known. They are solitary creatures who roam over vast distances. Human development infringes on their territory and hunting or trapping reduces their numbers. There are fears that global warming could reduce their habitats, leading to a decline in their overall population.

The wolverine features widely in North American popular culture with the name being adopted by baseball and football teams. Michigan is known as the Wolverine State and the University of Michigan uses the wolverine as their mascot. They are also prominent in the stories and mythologies of some First Nations people.