Launched in 2013, Little Britain is a 5-reels, 3-rows, and 30 paylines slot machine developed by Playtech. The free slot is one among Playtech's titles that take a bit of pop culture and bring it to the online gaming space. You can play the game at leading virtual casinos in the USA with wagering limits that start at $0.01 and go up to $25. More Games To Play For Fun

Go on a trip down memory lane as you play the Little Britain free slot from Playtech. The famous British comedy that ruled the airwaves between 2000 and 2002, and TV until 2007. The sketch show was quite the hit with British and US audiences and scored a somewhat okay rating of 7.6/10 on IMDB. Playtech delivers a free slot modeled around the show with all your favorite characters on the reels. A 5X3 design is one that online users are used to for most modern slots. In the game, the reels sit on a background of the Union Jack. In typical Playtech style, the game boasts a theme that adheres to the TV series in every sense of the word. You have beloved characters from the series, such as Vicky Pollard Dafydd, Lou, and Andy, among others, on the slot's symbols. On either side of the reels are the paylines numbered as they line up on the reels. Click on any of these to see how they run.

There's never a dull moment when you're playing the Little Britain free slot as Playtech offers online players lots of bonus rounds with free spins to boot. In designing the game, Playtech captures the upbeat energy of the series with color and motifs used on the interface. This fun mood is kept going as the animations and music are picked from the popular British comedy. Much of the action takes place on the bonus rounds, which is a plus for the game that also risks making the base game look drab. Even so, Little Britain is a free slot that offers a thrilling experience all around with awesome real money rewards. You could also have a go at the game for fun with no registration to see how it plays. 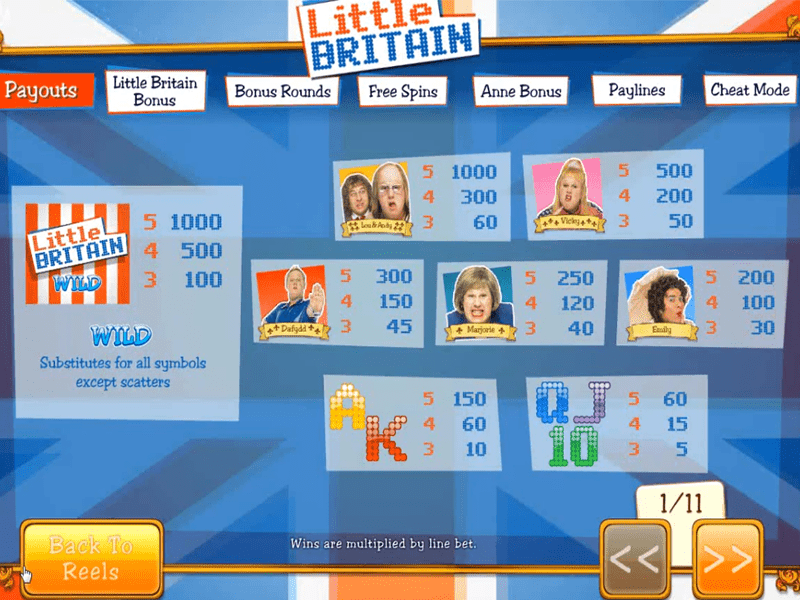 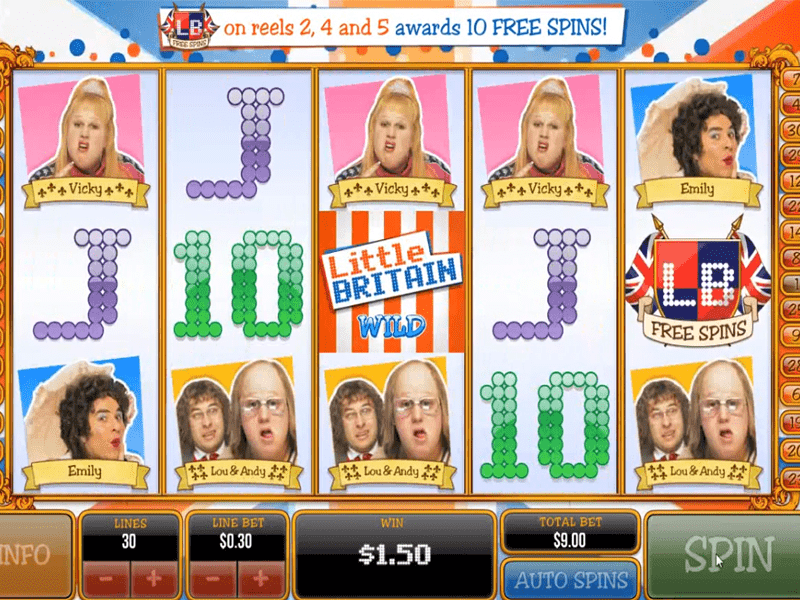 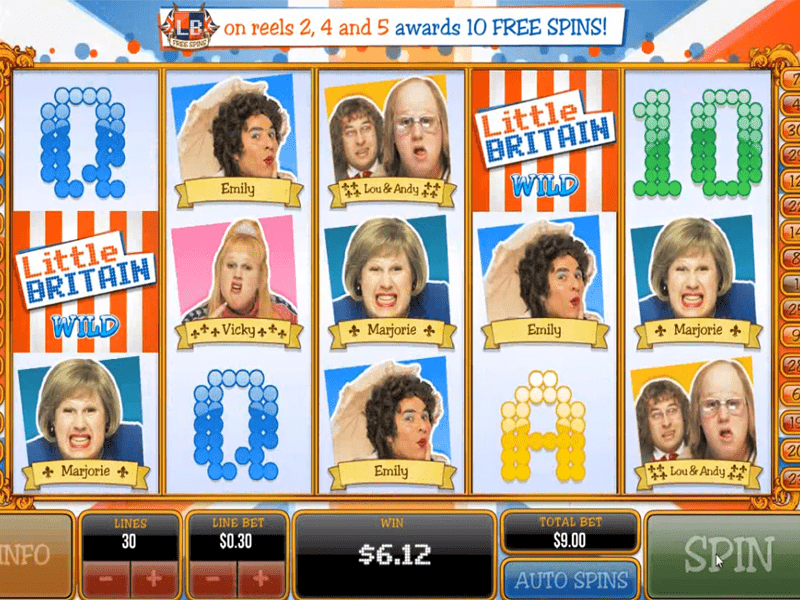 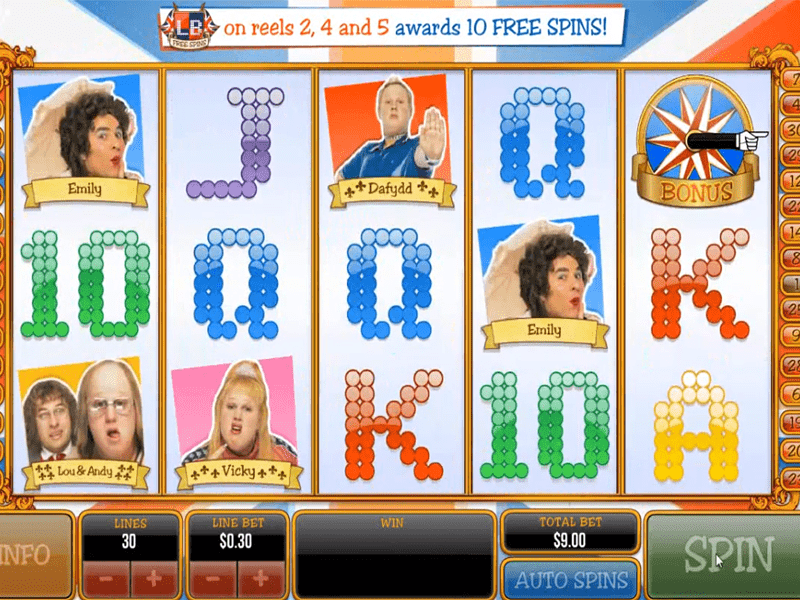 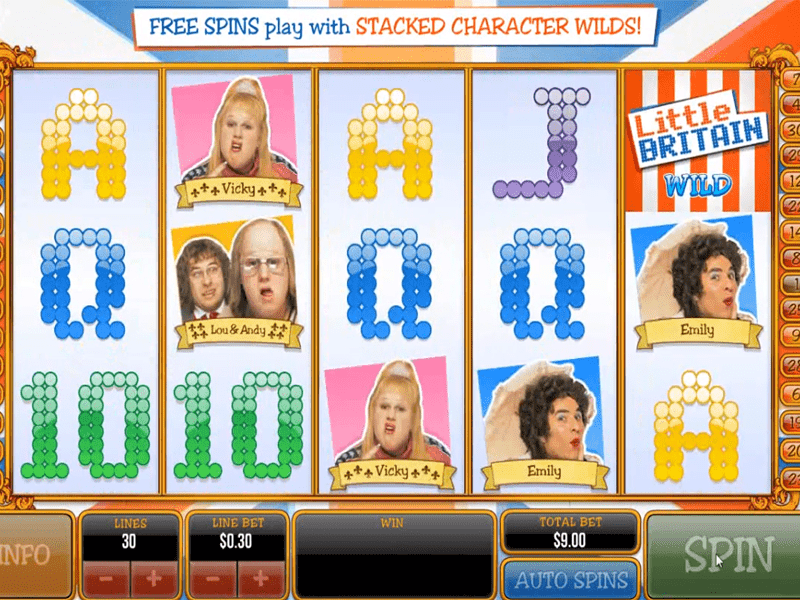 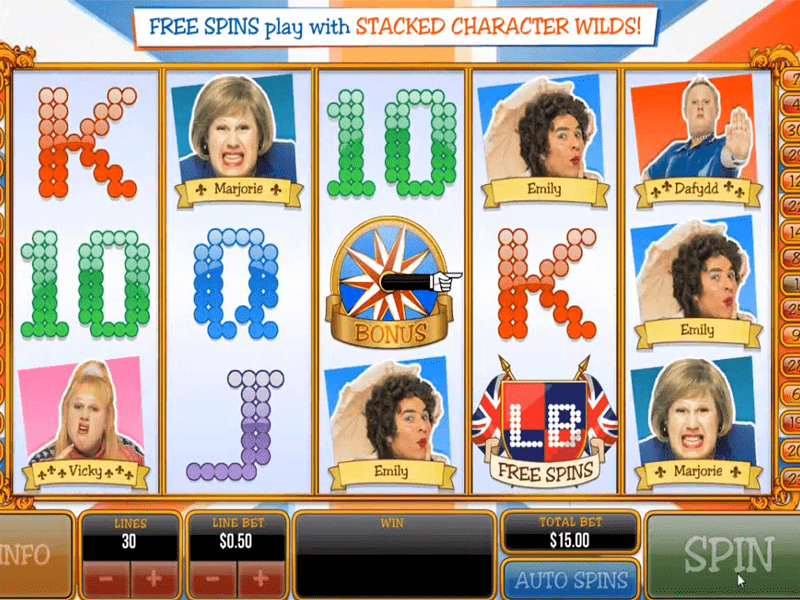 Whether you're playing a no registration demo or for real money, it's always refreshing to play at a good casino. There are a lot of perks you get if you're lucky enough to find one of the best casinos for online players in the USA. No deposit rewards and free spins are top among the rewards you can look forward to. You also don't have to contend with clunky interfaces and dubious rewards when you play in online casinos worth their weight in gold. Here are some of the top casinos in the USA to get the best rewards.

Little Britain is an exciting free slot that has been there for a while now. While it may miss out on the newest gaming engines applied on the latest games, it does give players a lot to look forward to. The game has a simple layout that keeps the reels prominent. Below the reels, you have different selections that help you navigate the Little Britain free game, including buttons for bet per line, number of lines, info, spin, and auto-spin.

To start the game, you have to set your bet. Setting your bet is a double-pronged process that online players may not be accustomed to from Playtech. This time you can use the + or - buttons to regulate the number of lines you want to bet on. You also have to select the line bet in this same way. Little Britain has wagering limits that cater to all types of punters as your line bet starts from $0.1 and goes up to $25. With your bet set, you're ready to spin the reels. The spin button can be found to the right of the buttons section. It's a large green button that you can't miss if you look below the reels. You also have a blue auto spin button that lets you keep the reels spinning 99 times.

For symbols, the Little Britain free game picks all the amazing characters from the show. Lou and Andy are the highest paying symbol that gives you back 1000X your stake for five of a kind. You get 500X your stake with five Vicky symbols. Dafydd, Marjorie, and Emily can be said to be the low-paying symbols as you get 300X, 250X, and 200X from these, respectively. The Little Britain free slot has a pair of scatters. One of which is a delightful Little Britain logo with the initials LB and the British flag on either side that rewards you with free spins. The second scatter is a bonus symbol with the word on it and leads you to a range of five bonus rounds modeled behind the various characters. The wild symbol is unmistakable as it has the word on it. Land the combinations for wild and substitute other symbols on the reels.

If we know anything about Playtech, the games always have a gamut of bonus rounds. This title does not stray from this established model, as you have bonus rounds for each character on the Little Britain free slot. Each of these comes with special features such as wilds, random multipliers, and more.

While plenty of features might get a player to try out online slot demos for fun, it's aspects like RTP and volatility that matter when you're playing for real money. Of course, players want no download online games that give good returns when they play them for real money. The RTP for Little Britain slot game stands at 94%. This is not the worst return we have seen on a game, but we acknowledge that it could be high. With most free titles made with an RTP of 96%, this is regarded as the average for modern slots. Even so, this gets a bit bearable if you prefer medium to high volatility free slots as this is one such title.

Players are used to progressive jackpots from Playtech, as most free titles from the company come with such a jackpot. Unfortunately, Little Britain slot comes with a 1,000 coin jackpot.

The Little Britain free slot comes with Android and iOS versions playable via your mobile browser. The game provider makes it easy to play on the go as the free title runs seamlessly on your iPhone, Google Pixel, and Samsung devices. You will be pleased to learn that Little Britain keeps its graphics qualities intact even when playing on your handheld device. While players on mobile might get a great game, we reckon that you will have more fun playing the Little Britain free slot on your Android or iOS tablet.

Playtech is one of the established names in companies powering top casinos in the USA. With years of experience in the online gaming front, the game provider has managed to win a faithful following in this part of the world. Players in America will like that most online casinos operating in this market offer highly rewarding bonuses with reasonable wagering limits.

Playtech has been on the online gaming scene since the industry's early years. Having launched in 2009, the game provider has earned the right to be regarded as an industry veteran in 2023. Most players know the game provider for its progressive jackpots and colossal reels. While the Little Britain slot may be the game on review, Playtech took off thanks to the Age of the Gods series of games, regarded as the company's most successful line of games. However, in recent times, the game provider has ventured into developing more virtual tables giving players variations for casino staples like Poker, Blackjack, and Baccarat.

Playtech is known for amazing bonus rounds and great free slots. As one of the game providers with the best branded free slots, Playtech offers online casino users some of the best from pop culture. There is a wide variety of titles from Playtech we think players will enjoy trying out. Some of the notable free titles from Playtech include; American Dad, Avengers, Blade, Daredevil, and Diamond Valley. Apart from Playtech slots, online gamers have a wide array of games to play from outstanding game companies with a reputable standing on online spheres. Top among the software provider you should try out include; Microgaming, NetEnt, Evolution, WMS, and BetSoft. The range of games you can play include; Immortal Romance, Lava Millions, Terminator 2, Gonzo's Quest, and Starburst. There are hundreds of slots on online casinos. All the online casinos worth playing give you a scope of games covering different themes. With new game providers coming out with new slots every so often, online players have a wide range of titles to try out. Little Britain is a branded slot with a theme that sticks to the famous British comedy series. Other themes you can play online include the Wild West, Asia and the Far East, Fantasy, Magic, Irish Luck and Folklore, TV and Movie adaptations, as well as Adult themes.

In addition to the range of themes you can play, you also get different types of slots. These include 3D, penny, classic, 5-reel, video, and I-slots. Little Britain is a video slot that can also be referred to as a 5-reel free slot if we're talking design.

Little Britain was a rib-cracking comedy show that thrived in sketch comedy that addressed everyday British life. In interviews about the show, Matt Lucas, one of the creators, describes coming up with the character for Vicky Pollard from a boy he encountered in previous cinematic works. With a cast that was very much in touch with everyday issues, the series captured audiences in many parts of the world after getting syndication. Meet the characters from the series on this delightful slot and win amazing rewards. Vicky Pollard gives online players a bonus that resembles her character on the show. This also goes on for all the characters featured on the Little Britain free slot.