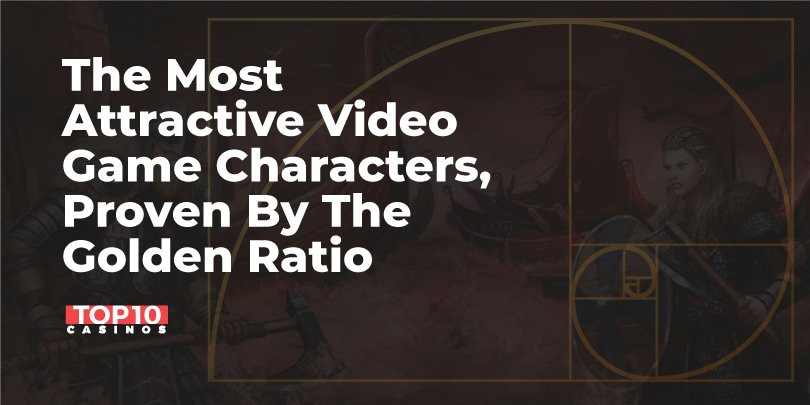 The Most Attractive Video Game Characters, Proven By The Golden Ratio

From the pixelated, PS1 heartthrob that was 90's Lara Croft, to the hyperrealistic Geralt of Rivia from the more modern Witcher franchise- we've all had a mini crush on at least one of our favourite video game characters.

Most of us have probably got into debates about it, too. Who is the hottest video game character? Is it weird to have a crush on some pixels on a computer screen? Is Mario better looking than Luigi? Thankfully, we now have a scientific way of answering at least one of these questions and settling the debate once and for all.

Measuring beauty by using what's known as 'the golden ratio,' which takes into account width and height dimensions of the face, Top10Casinos have been able to determine which one of our faves reigns supreme- taking the title of the most attractive video game character.

Fair warning, most of this list (and all of our top five!) is composed of male characters, which is representative of the video game industry as a whole. Nonetheless, we hope you enjoy this run down of the most attractive video game characters.

According to the golden ratio, you can't beat a man in uniform. Coming in at first place as the most attractive video game character overall, with a super-high score of 88.9, is Infinity Ward's formidable Captain John Price, in Call of Duty: Modern Warfare. Though this installation of the series was released in 2019, his infamous moustache has been gracing our screens on PC, PlayStation and Xbox since 2007.

In second place, we have another rugged, masculine character but this time with less facial hair! It's everyone's favourite Witcher, Geralt of Rivia, whose face was analysed using The Witcher 3: Wild Hunt game. With a score of 87, Geralt is scientifically proven to be one of the most aesthetically pleasing characters. This is no surprise to fans of the Netflix show, where Geralt of Rivia is played by none other than Henry Caville. What? He's not exactly known for being horrible to look at...

In third place, just a sliver behind Geralt with a score of 86.8, is the male version of Commander Shepard from the first edition of Bioware's Mass Effect series. Given that a 2007 release makes the game 15 years old, this goes to show that sleek graphics and hyperrealism aren't necessarily the key to creating a beautiful character.

Coming in at number four on our list, is yet another male. Surprisingly, two thirds of those on our list of most attractive characters are men, which has resulted in no women at all placing in the top five! With a very high score of 86, it's diamond in the rough and Yugoslavian native, Niko Bellic, from Grand Theft Auto 4. This game was released just after Mass Effect, in 2008.

Ranking within the top five by the skin of his teeth, is ex-NYC detective hellbent on revenge; the one and only, Max Payne. We analysed his facial features as shown in the first of the series, which was released in 2001. Though pixelated, this version of his character still showcases an angular jaw and symmetrical face, so it may come as no surprise that Payne is considered to be mathematically quite close to perfect, scoring 84.2.

Coming in at a very respectable number six, is Kassandra, the brunette beauty from Assassin's Creed: Odyssey. Just missing out on being part of the top five, the Spartan mercenary, Kassandra, is our first female character to make our list, scoring 84 out of 100. This means that she wins the title of 'most attractive woman in a video game', according to the golden ratio (and our deepest apologies go out to Tomb Raider stans).

We have another Assassin's Creed character ranking just behind Kassandra at number seven. This time, it's Renaissance man Ezio Auditore da Firenze. Though the upper part of his face is sometimes obscured by his hood, Ezio's scarred lip is one of the defining traits of his physical appearance. It's clearly a non-issue according to the golden ratio. however, which has assigned him a score of 83.5.

At number eight, with a score of 82.3, we have the stony-faced mercenary from the game Hitman: Codename 47. As the game's protagonist, Agent 47 is genetically engineered to carry out flawless assassinations, while looking handsome and staying smart in his token suit and red tie. Isaac Clarke from Dead Space 2 takes the number nine spot, with a score of 81.5, followed by Silver Fox, Sam Fisher from Tom Clancy's Splinter Cell, who scores 81.1.

If you're a Lara Croft fan, as many people were after the release of the first Tomb Raider in 1996, you'll be pleased to know that she does rank in the top 20. In fact, for the Rise of the Tomb Raider game, Lara just missed out placing within the top 10, ranking as number 11 overall, with a score of 79.6.

Other notable characters include the other two women on the list, who rank as number 15 and number 20. These are; Ellie, from The Last of Us 2, and the female version of Commander Shepard from Mass Effect. The Last of Us 2 is also the most recent game on our list, having been released in 2020.

Where to find the most attractive video game characters 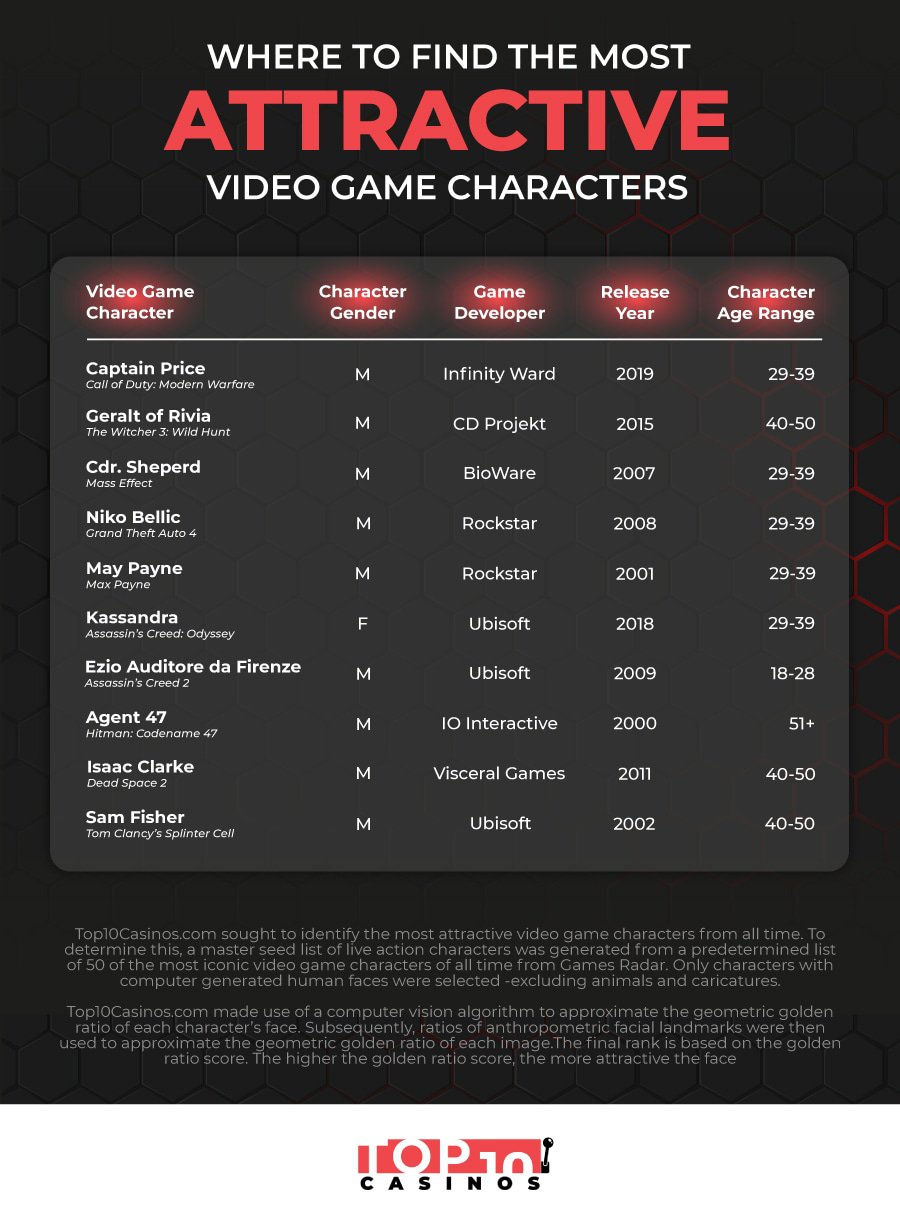 Out of the 20 characters on our list, half were from this time period. This goes to show that having more advanced graphics in a game doesn't necessarily equate to creating more attractive characters. So if you're looking for some lovely looking characters- your local second hand gaming store might be the place to go!

When it comes to age, characters within the 29-39 bracket score higher than any other age bracket overall, with eight of the characters in the top 20 being of this age group, followed by the 18-28 age bracket, which has seven.

Finally, Ubisoft and Bioware top the charts when it comes to creating the most attractive characters, with both companies having three of their characters ranking within the top 20 most attractive. This is followed by Naughty Dog, Rockstar and Capcom, all of which have two.